For people seeking asylum in the U.S. getting in to the country is only half the battle.
» Subscribe to NowThis: http://go.nowth.is/News_Subscribe

As an immigration lawyer, Andrea Sáenz can confirm that Trump’s claims about immigrants being violent criminals are untrue.

“Immigrants are often people who didn’t have a choice to leave their countries and their homes,” she explained. “As a Mexican American who just happened to be born on this side of the border, I can tell you they are human beings seeking safety and a future.”

Sáenz has encountered many clients who came to America seeking asylum, only to be put in detention centers and have their children taken from them. She said that, although it’s great that those cruel acts are getting media attention, not much attention is given to what happens next.

“Today there are over 300,000 immigrants who are seeking asylum in the United States and struggling to survive while they wait patiently, months or even years for their claims to be decided in court,” she explained. “Asylum seekers can stay inside the United States, but they can’t get jobs to pay for rent, food, or child care without an official work permit that takes months to obtain.”

Sáenz also says that immigrants facing deportation don’t have a right to appointed counsel either, so they are often left literally defenseless when facing a judge. So she says Brooklyn Defender Services and RAICES have launched a campaign to raise support for immigrants by offering them necessities, application fees, and legal services. 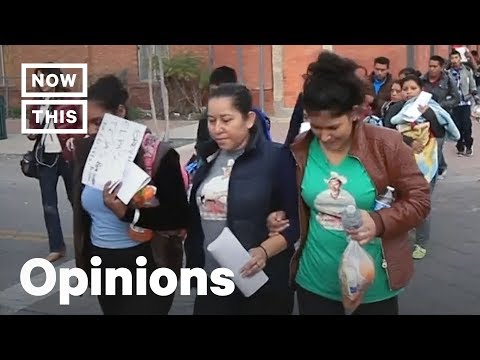 For people seeking asylum in the U.S. getting in to the country is only half the battle. » Subscribe to NowThis: http://go.nowth.is/News_Subscribe As ...