Where this 12-time Olympic medalist stores all of her medals

Although Olympic medals are not made out of the pure, precious metals, they are extremely valuable. That is why we wonder how athletes keep them safe. Dara Torres, five-time Olympic swimmer and 12-time Olympic medalist, told us where she keeps her medals.

Torres has teamed up with SHOW MORE OF YOU from Celgene and Otezla — a campaign that is shining light on the psoriasis or psoriatic arthritis. To learn more about psoriatic disease, visit the campaign's website. Following is a transcript of the video.

When I introduce myself, I don't like to brag and say, "Oh, I won these many medals."
But, I actually have four golds, four silver, and four bronze medals, from five different Olympic games.

I am Dara Torres. I am 5 time Olympic swimmer and I am here because I have teamed with Celgene and Otezla for the Show More Of You campaign.

OK, so where do I keep my medals?
Well, I use to keep them under my bed, especially when I lived here in New York, because
I didn’t have a safe in New York and it was just an easy place to leave them.

When my mom asked where I was keeping them, I told her that and she was not a happy camper.

So my mom made put it in a safety deposit box at the bank. But then, I go to an appearance — maybe leave on a flight at seven at night — I go to the bank after four and they are closed. I am like, “Uh! I can’t get my medal.” So, I am like, “Uh! That’s not a good idea.”

So, now that I leave in a house in a nice neighborhood, I put them in a safe as easy access
and they are very much protected.

But it is funny, because when my mom was on me about trying to keep them in a safe place, at that point in time, I had given her one of my gold medals — because I just wanted her to know how much I appreciated and thanked everything that she had done for me. So one Christmas I did that.

When I came back to visit her, I walk into her house and there’s the medal — the golden medal — in glass —plexiglass case, with a light shinning on them.
I am like, “Wait. Mom, what happened to, like, protecting the medal, so no one steals it?”
So, she may say one thing but definitely does another thing.

Where this 12-time Olympic medalist stores all of her medals 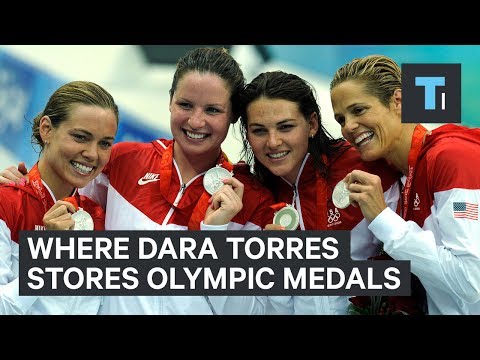 Although Olympic medals are not made out of the pure, precious metals, they are extremely valuable. That is why we wonder how athletes keep them safe....