Who Is Andrew Yang? Narrated By Sierra Katow | NowThis

Andrew Yang, a child of Taiwanese immigrants, went from boarding school debate team to a corporate law career before entering the world of celebrity philanthropy. But how did the founder of a test prep company become the candidate who wants to give you $1,000? ????: Sierra Katow
» Subscribe to NowThis: http://go.nowth.is/News_Subscribe
» Sign up for our newsletter KnowThis to get the biggest stories of the day delivered straight to your inbox: https://go.nowth.is/KnowThis

Andrew Yang is running on the idea of a Universal Basic Income, a policy which would give every adult in the U.S. $1,000 a month, which seems cool. After tons of research, we found out that money is awesome. But is it enough to unseat the nation’s favorite former reality TV star? This is the story of Andrew Yang, a tech savvy entrepreneur turned presidential candidate.

Yang was born in 1975 in Schenectady, New York to Taiwanese immigrants.

Yang was set up for success. When he was 12, his parents sent him to the Center for Talented Youth, a summer camp for extremely smart kids run by Johns Hopkins University. In order to be granted admission to the camp, kids have to take the SAT. At 12 years-old, Yang scored a 1200 out of 1600. He spent the next five summers there, improving his SAT score each time.

Yang continued on his executive-centric path and went on to attend Brown University and later graduated from Columbia Law School in 1999.

Yang landed at the corporate law firm Davis Polk & Wardwell, making $150,000 a year. But he quickly realized - as the Washington Post reported - “he wanted to be the person creating businesses and deals, not the person writing the contracts.” Five months after taking the role at the law giant, Yang left.

Among other issues, the centerpiece of Andrew Yang’s campaign is the idea of making capitalism work for millions of Americans who have and will continue to lose their jobs to automation by paying them. Literally. By providing a universal basic income of $1,000 a month to all Americans, dubbed The Freedom Dividend, Yang believes it will grow the economy and will be a good way to build businesses, reduce crime, help folks relocate for work, and stay healthy.

Critics of Yang’s “Freedom Dividend” note that it would replace existing social welfare benefits like food stamps or housing vouchers. So you can either keep those or take the $1,000, but not both which would divert money from programs that help the poor. Additionally, they argue giving $12,000 a year to 254 million Americans would cost $3 trillion year and create inflation. To finance all of this, Yang proposes a Value Added Tax (or VAT) of 10% on “on the production of goods or services a business produces”. Jeff Spross of The Week breaks it down: 'In brief, a value added tax (VAT) is a form of sales tax that's applied to every step in the supply chain. Exactly how business models pass along the costs of the tax is debatable, but economic studies are pretty unanimous that most of the burden gets handed off to the end consumer. Since lower-income households spend more of their budgets on basic consumption, that makes a VAT regressive: it takes a bigger percentage of poor Americans' income than of wealthier Americans' income.'

It’s unclear if Yang’s 'Freedom Dividend' will work. Or if he’ll get the chance to make it work...

In many ways, he’s just sort of there preaching his Freedom Dividend gospel. But he’s built a movement. Thanks to his massive online following known as “The Yang Gang,” he’s been able to outlast bigger names, like amatuer skater Beto O’Rourke, and former District Attorney Kamala Harris.

For more on the 2020 election and Andrew Yang, subscribe to NowThis News.

‘Who Is’ is a weekly miniseries, narrated by celebrities, that explores the people behind the Trump administration, and their complicated often salacious histories.

Who Is Andrew Yang? Narrated By Sierra Katow | NowThis 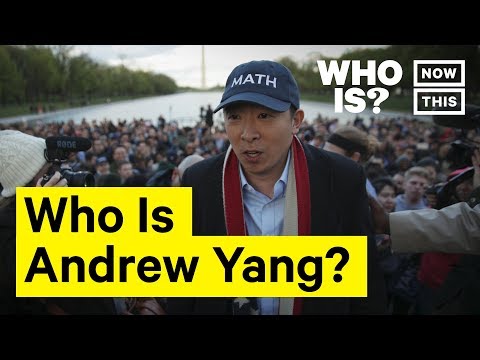 Andrew Yang, a child of Taiwanese immigrants, went from boarding school debate team to a corporate law career before entering the world of celebrity p...