Why A No-Deal Brexit Would Be Bad News | NowThis

Believe it or not, the UK's government is currently just as big a dumpster fire as the U.S. — here's what could happen if they don't reach a deal on Brexit before it's too late.
» Subscribe to NowThis: http://go.nowth.is/News_Subscribe

So take a moment out of the dumpster fire that is US politics for one moment to hear about another one.

Brexit. The UK has just over two months before it’s due to leave the EU, and there’s no clear idea what that might look like.

Everything from its immigration policy, to its safety regulations, to its labor laws, have been formed by its membership of the EU. Both Britain and the EU want to make a deal for what the exit looks like - and what the new relationship would be.

But what would happen if the UK left the European Union without a deal in place?

There are about 800,000 British citizens who live in the EU, who could wake up on March 30 and find that they’ve lost the right to work where they live. That even includes footballers.

A million people could lose their jobs and Northern Ireland could face rolling blackouts, according to some reports.

This prospect is called a ‘no-deal Brexit,’ and is described by many as Britain essentially ‘crashing out’ of the European Union.

Crashing out means no regulations or rules in place to govern how everything from trade to citizenship status to border security is affected.

It could lead to food shortages, medicine shortages, it would affect air and ground travel, immigration, and more.

The formal deadline the UK faces is March 29, 2019.. The main proposal so far has been historically and overwhelmingly defeated in Parliament.

The UK invoked Article 50 almost 2 years ago, on March 29, 2017. Article 50 is basically the breakup article in the Treaty of the European Union. It’s what a country invokes when they’re ready to withdraw from the union. And though it’s written into the treaty, no country has actually attempted this before, which is one reason why Brexit is so unprecedented and complicated. The treaty says once you invoke Article 50, you have two years to negotiate the terms of your exit. So here we are, looking at March 29.

It’s like the UK and the US are competing to see which government can be more dysfunctional right now. If you think the longest shutdown of the federal government in US history is bad — and it objectively is, given how it’s impacted air travel, critical health services, and 800,000 workers going multiple weeks without a paycheck — a no-deal Brexit would be equally as bad, if not worse.

Here are some of the ways it would affect the everyday person’s life — including those who don’t even live in the UK:

The UK currently gets a lot of its food and medicine from other countries in the European Union. Because they’re all part of the same union, the trucks that physically bring in these items aren’t required to go through extensive customs checks when they reach the UK border. But if Britain exits on March 29, that would change — and involve a lot more paperwork.

That could mean delays of deliveries, which would lead to shortages. Now, the UK government has been working on a contingency plan that involves pharmaceutical companies stockpiling certain life-saving medicines, like insulin, That would last six weeks. But six weeks can go by quickly — And not every company feels prepared for a no-deal Brexit, since until very recently, it seemed like a lesser reality.

Here’s how the New York Times put it: British legislators were ‘so alarmed’ by the ‘prospect of a no deal-exit’ that they supported an amendment to stop contingency planning for crashing out, because they wanted to make it more difficult to leave without an agreement. Only the most hardline Conservative MPs seem to want a no-deal exit, and yet that’s one path ahead of the UK.

Ok, so trucks can’t get in at the border. What about flying supplies in?

Airlines have the right to travel between the UK and the EU under current European Union rules. So with a no-deal Brexit, aircraft could theoretically be grounded.

Why A No-Deal Brexit Would Be Bad News | NowThis 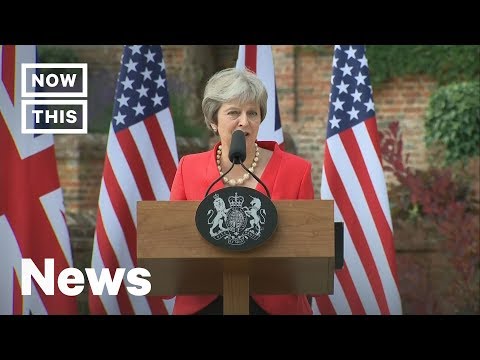 Believe it or not, the UK's government is currently just as big a dumpster fire as the U.S. — here's what could happen if they don't reach a deal on B...