Why Beer Foams When You Tap The Bottle

If you tap the top of someone's beer bottle with the bottom of yours, it instantly creates a beer foam volcano. So what's causing this? Following is a transcript of the video.

You might have experienced this, depending on how evil your friends are. Your friend taps the top of your beer bottle with the bottom of theirs. Why this happens was largely unknown until Javier Rodriguez-Rodriguez and his colleagues at Carlos III University in Madrid figured out why.

Rodriguez-Rodriguez: "I was with some colleagues one night in a bar after work. Colleagues from the university, from my department, and then we all started to do this thing to each other. And we were, we started basically to discuss like so what is the cause of this explosion of foam."

He used high-speed cameras to see the phenomenon in action. Then he zoomed in really close. As soon as the bottle is struck, a wave of vibrations runs through it. When the wave hits tiny bubbles throughout the beer, the bubbles begin pulsating and then collapse.

Rodriguez-Rodriguez: "So this is, in few words, this is like an explosion. You think about that, the explosion is actually the sudden release of a huge amount of gas that is trying to make it's way out. So this is what creates these waves and explosions and these things. So this is in few words what happens with the bubbles. The cloud of bubbles that resulted from the explosion. It goes super fast so it multiplies the volume by ten. In a matter of one millisecond to ten milliseconds."

When the bubbles collapse they form tiny fragments. Those fragments are inflated by other CO2 in the beer. As they fill up with CO2 gas, they grow more buoyant and start rushing toward the surface. The faster the bubbles rise, the faster they grow becoming a self-feeding loop. The effect looks something like a mushroom cloud and it's about as unstoppable as an explosion.

Rodriguez-Rodriguez: "So it means that these plumes are able to grow until basically, they occupy the whole volume of the bottle."

He says you can either try to drink the expanding foam or find the nearest sink.

Rodriguez-Rodriguez: "I prefer to drink it."

Their findings could have wide implications, beyond your beer. Often large amounts of CO2 erupt from lakes and volcanoes. Geologists say if they can predict those events they could curb CO2 exposure in nearby communities and even warn the public before volcanic eruptions. I'll drink to that!

Why Beer Foams When You Tap The Bottle 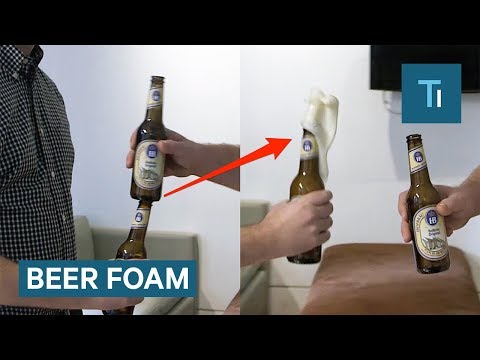 If you tap the top of someone's beer bottle with the bottom of yours, it instantly creates a beer foam volcano. So what's causing this? Following is a...