Why Donald Trump Jr. Is Worried He Could Be Indicted | The Russia Desk | NowThis

Donald Trump Jr. is 'very worried' that he could be indicted in the Russia investigation because of the Trump Tower meeting — here's what that would mean for him and the president.
» Subscribe to NowThis: http://go.nowth.is/News_Subscribe

Special counsel Bob Mueller’s investigation into Russian meddling in the 2016 US election is racking up indictments — and Donald Trump Jr. reportedly told friends he’s very worried that he could be in its crosshairs.

Why? Because he was the one to arrange the single-most controversial meeting of his dad’s presidential campaign: a sit-down at Trump Tower with a group of Russians promising that they had dirt on Hillary Clinton.

As of January 2019, two people involved in that meeting have already been indicted - one on the Trump side, one on the Russia side. We’ll get to that in a minute.

Recently, Congresswoman Jackie Speier, who sits on the House Intelligence committee, said Trump JR might be the first person they issue a subpoena to in the Russia investigation, because she didn’t think he was telling the truth.

Now, Trump Jr. says he didn’t break the law, and that the Russians never delivered anything he could use anyway. But legal experts say that it’s pretty likely that he committed a number of federal crimes.
If Mueller indicts Trump Jr., it would be a huge deal. It would be remarkable for the son of a sitting president to be charged with a major crime. But more importantly, it would further show that there was collusion between Russia and a senior official of the Trump campaign in order to flip the 2016 elections. And there’s even the possibility that Trump Jr.’s indictment would end up implicating the president himself. Here’s how...

Let’s first go back to how the infamous Trump Tower meeting got set up: On June 3, 2016, when Trump Jr. received an email from British publicist Rob Goldstone.

Goldstone represented a father-son pair of Russian real estate developers called the Agalarovs who had done business with Trump senior in the past. Goldstone said that they had met with a Russian government lawyer who had something juicy for the Trump campaign: “official documents and information that would incriminate Hillary and her dealings with Russia.” Goldstone also he said that the stash was “part of Russia and its government's support for Mr. Trump.”

Trump Jr. didn’t seem nervous about collaborating with the government of a major rival of the US, or about violating federal campaign laws. In fact, he seemed elated. He replied, “If it's what you say I love it.” A couple phone calls later, and the meeting was set up.

A couple of days later, on June 9, Trump Jr. met with the Russians at Trump Tower in New York. Trump Jr. was accompanied by Paul Manafort, Trump’s then-campaign chair, and Jared Kushner, Trump’s son-in-law who had a senior role in the campaign. They met with a delegation of five Russians, the most important of whom was Natalia Veselnitskaya, a Russian lawyer with ties to the Kremlin. She has since been charged in a SEPARATE case about money laundering for trying to thwart federal investigators from looking into a Russian businessman and his investment firm.

So we know who attended the meeting — but we don’t know what actually went down during it. All we really have is the testimony of some of the people who attended — and they have an interest in hiding any shady or illicit things that happened during their chat. In fact, that’s exactly what Trump Jr. initially did.

When the New York Times uncovered the fact that the Trump Tower meeting had happened about a year later, Trump Jr. reacted by saying it was about a program for adopting Russian children, and he made no mention about the whole getting-dirt on-Clinton thing.

Only days later, just as the New York Times dug up more material on the real purpose of the meeting, did Trump Jr. finally come clean about why the whole meeting had been set up. In other words, he only gave an honest account when his hand was forced.

Why Donald Trump Jr. Is Worried He Could Be Indicted | The Russia Desk | NowThis 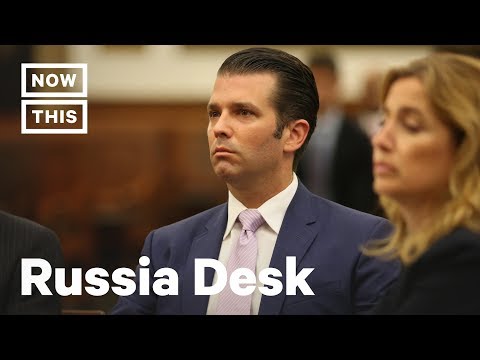 Donald Trump Jr. is 'very worried' that he could be indicted in the Russia investigation because of the Trump Tower meeting — here's what that would m...