When people say nasty things to us, it's because they need to say it. Here's why! X

Learn how to create positive change and be the best version of yourself with my 30 day happiness program!:
www.30daystobehappyalways.com

If you enjoyed watching this, subscribe to the channel for more inspirational videos!

Sign up for my weekly inspirational emails here: http://eepurl.com/_isYz

Letting someone say what they need to say doesn't mean we have to keep spending time with the person. It doesn't mean we volunteer for abuse. What it means, is that we don't take offence, because we truly understand that when people are nasty to us, it's not about us at all. It's about what they needed to do.

People only say things they NEED to say - maybe they are suffering and they don't want to feel alone in their pain.  Maybe they were never shown kindness so they don't know how to be kind. Maybe they don't feel good about themselves so that they reflect their insecurities upon other people.

As long as the words don’t cause us hurt or harm, we can allow them to say it. Allowing it means not being upset or reacting badly. If you're in so much pain and unhappiness that you needed to say negative things… then allowing you to say them is the best I can do to help.

There was a story of a thief who was trying to steal money from a temple's donation box, and a monk saw him.

The thief took a knife and pointed it at the monk and warned him not to ring the alarm, and when the monk reached into his robes, the thief yelled and put the knife almost to his throat.

All the monk took from his robes were the keys to the donation box, which he gave to the thief.

Then the monk asked the thief, "Are you hungry?" There's food in the cupboard right over there.

The monk's perspective was that the money was donated to the temple for the purpose to help, and he saw a man in need of help.

The thief took the money and the food and he left. He continued stealing and was caught and jailed for 6 months. When he got out, he went right back to the temple again.

And the same monk caught him at the donation box.

This time however, the thief was there to steal something different. He said the monk, "You were the first person to be kind to me. You saw I was thin and knew I was hungry. I want steal your secret. Teach me how to be kind even to a thief pointing a knife at me."

It often seems silly, or even stupid, helping people who are nasty to us, but sometimes they are the ones who need the help the most.

As long as we are not physically or emotionally hurt or harmed, we can allow people to say what they need to say. On our end, we work on ourselves, to not take things personally, to have more understanding and kindness, and to be happy, always. 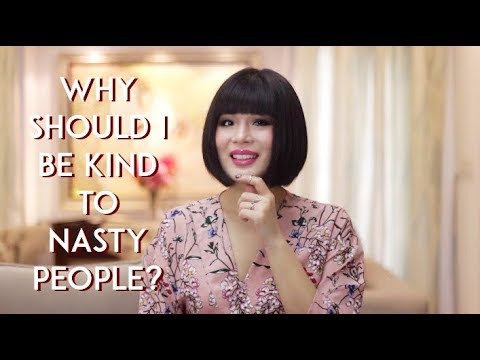 When people say nasty things to us, it's because they need to say it. Here's why! X Learn how to create positive change and be the best version of you...