Android phones often have similar or better cameras than iPhones. But on Snapchat, it’s not even close.

Snapchats from Androids are much worse than from iPhones. That’s because it’s way easier to develop an app for iPhone. Developers only have to consider a few Apple devices. But for Android, there are hundreds of different phones — all with different screen sizes, running different versions of Android software.

Snapchat found a way around developing too many different versions of their Android app.

Instead of taking an actual photo with your actual camera, the app just takes a screengrab of your camera view. This way, one image capture method works on most Android phones, even if the picture is worse for it.

There are a few Android devices, like the Google Pixel 2, that actually use the camera on Snapchat. But next time you see a bad photo from your friend on Android, you know why...it's probably just a screengrab.

On a Q3 earnings call, Snapchat suggested they would be making some improvements to their Android app. CEO Evan Spiegel said, "Given the sheer volume of different Android handsets used to access Snapchat, we have had to establish new processes to ensure that our quality efforts can be maintained. This will be an ongoing investment." 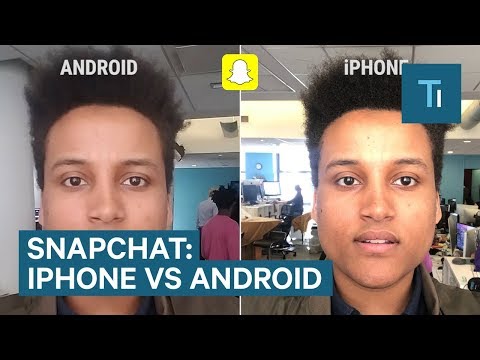 Android phones often have similar or better cameras than iPhones. But on Snapchat, it’s not even close.  Snapchats from Androids are much worse than f...