Once upon a time, the NRA lobbied for universal background checks on all gun owners.
» Subscribe to NowThis: http://go.nowth.is/News_Subscribe

The NRA used to fight for state-imposed background checks. Now Democrats are introducing a bill to see it through.

Sen. Chris Murphy: 'Way back in the 1920s, a relatively new organization called the National Rifle Association proposed that states should pass laws regulating handguns – the sales of which were starting to explode all across America. Only suitable people with a good reason for owning a gun should be able to possess a gun, said the NRA, and only after a reasonable waiting period. Well a few states bit, but it wasn’t until 1993, after the assassination attempt on President Reagan, that Congress passed the Brady background checks law to establish a national instant background check system, better known as Nix. The Brady bill required all licensed sellers to conduct a background check before somebody can buy a gun. By then, though, the NRA had been taken over by right wing extremists and now hated the idea that anyone should be banned from buying guns. But most Americans liked the new law. And now, when you go buy a gun from a federally licensed dealer in person or online, your name is run through the background check system to make sure that you’re not prohibited from owning a firearm. That check normally takes about 90 seconds. Convicted felons, domestic abusers, and people who are severely mentally ill aren’t allowed to buy a gun. The good news is background checks work. Since the Brady law was enacted, over 300 million background checks have taken place, and over 3 million sales to criminals and people who are seriously mentally ill were stopped by a background check. That’s 3 million potentially dangerous people who never got their hands on a gun. But a lot has changed in the last 25 years, and our gun laws haven’t kept up. The Brady bill only requires background checks by licensed gun dealers, not private sellers who push guns online or at gun shows. People who shouldn’t be able to buy a gun are taking advantage of these loopholes. Gangs smuggling guns into Central America just buy their guns at gun shows. ISIS put out a video last year telling their recruits in America to do the same. A recent study from Harvard showed that as many as a quarter of all guns transferred from one person to another happened without a background check, often by people knowing that they can’t pass one. Many states, including Connecticut, have passed their own laws to expand background checks and close these loopholes. But until our federal laws catch up, criminals will continue to exploit these loopholes. That’s where Congress comes in. I teamed up with Mike Thompson in the House of Representatives to introduce the Background Check Expansion Act – a bill to close loopholes in our gun laws, and require a background check for every sale. Here’s what it does and it’s simple. It says that every sale, no matter where it happens, has to come with a simple, quick background check. Sure, we allow for common sense exceptions, like when guns are given by one family member to another. But the basic idea is that every gun sale needs to come with a check. And if we pass this bill, we’re gonna save thousands of lives. Why? Because the data tells us that background checks work better than almost any other gun safety law. In states that require background checks for all handgun sales, 47% fewer women are shot to death by their intimate partners. There are 53% fewer gun suicides, and 53% fewer law enforcement officers are shot to death by handguns. So just think about that. A public policy that 97% of Americans support, that we know saves lives. Why the hell aren’t we getting this done? Well, the answer to that question is really in your hands. I’m gonna do everything I can to get our Background Check Expansion Act signed into law. But you matter more. Call your legislator, make noise on social media, join an anti-gun violence group, show up at a town hall, and demand that it’s time to pass universal background checks.' 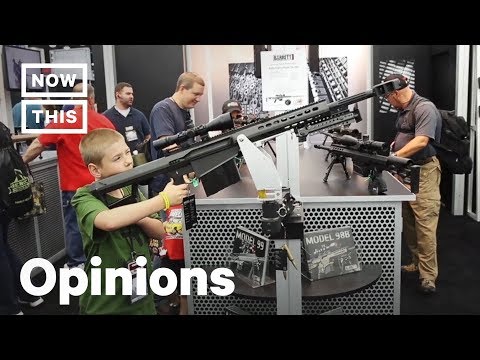 Once upon a time, the NRA lobbied for universal background checks on all gun owners. » Subscribe to NowThis: http://go.nowth.is/News_Subscribe The NRA...