Why This Man Is Walking Nearly 600 Miles Across Canada | NowThis

After this man's aunt disappeared, he set out to walk hundreds of miles across Canada to call attention to the alarming number of missing and murdered Indigenous women.
» Subscribe to NowThis: http://go.nowth.is/News_Subscribe

This man walked nearly 600 miles across Canada after his aunt went missing.

Matthew Jefferson: ' I'm walking for the missing and murdered indigenous women and girls. Since leaving this trip, June 1, there's been 58 women and girls that have gone missing, with the recovery of 28 corpses, bodies, in six months.

Jefferson: My aunt Frances Brown went missing just outside of Smithers. And the gentleman that was with her had made it to town but she did not, and so I decided to to walk across Canada. Not only do I get to meet the people, but I get to heal myself as well along this trip.'

Jefferson: To date we have 1182 women missing, that we have no accountability for. We have no idea what's happened to them. Non Indigenous communities, they want to help, but they don't know how. So it's my job to educate them on how they can help. So I present white, but I'm indigenous. I'm with Wet'suwet'en Nations, from northwestern British Columbia.

During the trip, Jefferson was reunited with family who he had never met . His relatives threw him a feast when he arrived in Prince George, BC and gave him an eagles feather for his journey

Jefferson: Now within my culture the Eagles feather is given to our messengers. The significance of the feather is to lift the weight from one's back and feet so that you can run faster and you can go further. So that had made me in that moment an honorary messenger for my people, my family, my tribe.

Jefferson’s journey is sponsored by New Balance Victoria . The company gave him shoes to wear during the trek which he is doing entirely by foot . He has also been supported by donations and stays with First Nations communities

Jefferson: I don't accept rides. I don't hitchhike at all. I don't have a support vehicle. So anything that I need has to be in my pack. The 93, the Icefields Parkway is certainly my favorite stretch of highway to walk. The prairies, definitely not. You know with no sense of progression, no sense of achievement, just the same views all the time. You know, it definitely plays on your mind. Pretty sure I've left some of my sanity in the prairies.

Jefferson has visited 37 Indigenous communities and plans to finish his trip in roughly 3 months when he arrives to Cape Spear, Newfoundland

Why This Man Is Walking Nearly 600 Miles Across Canada | NowThis 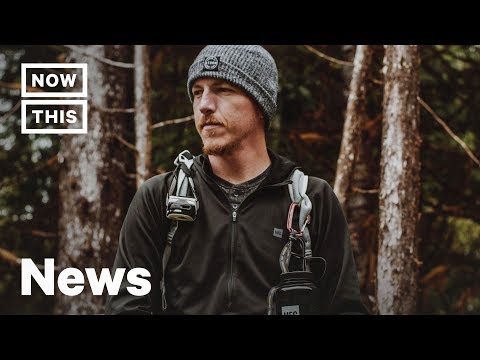 After this man's aunt disappeared, he set out to walk hundreds of miles across Canada to call attention to the alarming number of missing and murdered...