Marco Ciocca is the co-founder and chairman of The Montessori Schools in Flatiron and Soho. In May the school sent an email to parents alerting them that they could now make their tuition payments in bitcoin. We went to speak to Ciocca at The Montessori Flatiron to find out how the transactions work, why it's better for the school than accepting credit cards, and whether any parents actually paid in bitcoin. Following is a transcript of the video.

Sara Silverstein: I’m here with Marco Ciocca, the co-founder and chairman of The Montessori Schools in Flatiron SoHo and also the head of my daughter’s school. Do you accept bitcoin?

Marco Ciocca: We do, we do. As of this past summer, we made the decision to accept, at the moment, bitcoin and ethereum.

Silverstein: And how did you make that decision?

Ciocca: I’d been sorta following the space for a few years — just really noticed that a lot of forward thinking businesses were starting to accept it. The more I looked into it in terms of ease of payment, low fees, speed of the transactions — and I went to a couple of the conferences and spoke to some of the developers to kind of learn the upside and obviously the negatives of accepting it.

You know, it sounded like something that really fit with our philosophy at the school.

And in that time, also we had probably a handful of parents who mentioned, “Hey do you accept bitcoin? I’ve got this bitcoin. Can we pay tuition in bitcoin?”

So all those things kind of put together led us, you know, meet as an administration and decide whether or not to do it.

Silverstein: Do you use a third-party system?

Ciocca: We do, we do. We have a merchant account with one of the bigger exchanges here in the US. It’s relatively simple to set up and we just send out a request, like an invoice like you would typically and they can just wire it to our wallet. We have a system where it instantly converts to fiat to US dollars.

So we don’t actually hold the bitcoin, so we don’t you know, play with kind of floating it or any fluctuation like that. We instantly convert it to dollars and it transfers to our bank account. So it’s as if someone wrote us a check or paid us in cash or sent us a wire. It’s just less expensive and it’s quicker.

Silverstein: And is there any sort of transaction fee? Like, what do you get to keep?

Ciocca: Yeah, there’s about a 1% transaction fee, which is less than, you know, 2, 3, 4% sometimes with credit cards. And credit cards obviously take – A lot of them get declined and then you have more fees and then you have to recharge them and that’s been kind of, sort of a headache for — especially for schools.

Silverstein: So do you accept credit cards?

Silverstein: So you accept cash?

Silverstein: To me, originally the — you accepting bitcoin seemed like a bit of a novelty and I have come around completely on that side. Did anybody actually end up paying in bitcoin?

Ciocca: Yes, we had about a handful of parents that paid in bitcoin. Among them were some parents who actually, you know, their businesses are based on blockchain. So it was something they were readily familiar with. You know, other parents that are in this space as their, you know, career, go to the school as well.

So it’s definitely something that our parent body understood.

There were obviously those that were like, you know, “What is this?”

And you know, it was quite easy to explain it to them. It’s like paying with, you know, if you’re gonna pay a check or wire. If you don’t want to pay one way or the other, it’s just another form of payment. It’s not something that, you know, you have to do. It’s just something else we offer.’’ 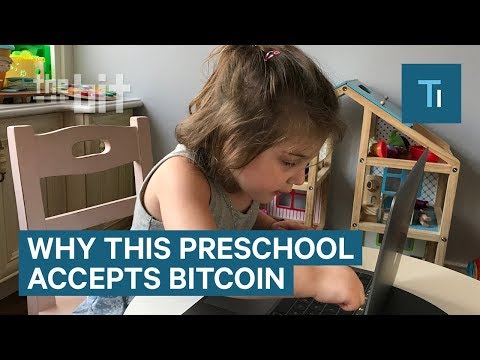 Marco Ciocca is the co-founder and chairman of The Montessori Schools in Flatiron and Soho. In May the school sent an email to parents alerting them t...