Why US gun laws get looser after mass shootings

Congress has rarely acted. But gun laws have been changing.

For decades, the US Congress failed to make meaningful movement on gun reform in the aftermath of mass shootings. But that weak federal response has obscured another story: that state gun laws change after mass shootings all the time. And a study found that, in Republican-controlled state legislatures, a mass shooting roughly doubles the number of laws loosening gun restrictions in the next year.

In this video we look at Texas, where decades of mass shootings in the US have been met with laws that expand gun access. We spoke with Flo Rice, a survivor of the 2018 Santa Fe High School shooting, where a gunman killed 10 people. Flo was shot six times. She and her husband, Scot, became advocates for gun safety, and tried to get tighter gun laws passed in Texas. Watch the piece above to see what happened, and what their story reveals about who has power when it comes to gun policy in the US.

The Giffords Law Center to Prevent Gun Violence has lots of resources to understand gun laws in the US. We mention that the US has only had a few major federal laws enacted on guns. You can learn more about some of them here: https://giffords.org/lawcenter/gun-laws/policy-areas/other-laws-policies/key-federal-regulation-acts/

The Texas Tribune has lots of information on the state’s gun laws. Here is one of James Barragán’s recent articles: https://www.texastribune.org/2022/05/30/texas-democrats-gun-control-uvalde/

The Texas Tribune also has this timeline that helped us develop ours:
https://apps.texastribune.org/features/2019/texas-10-years-of-mass-shootings-timeline/

The RAND Corporation has been tracking gun laws across the country in their database: https://www.rand.org/pubs/tools/TLA243-2-v2.html

OpenSecrets has lots of data and resources on lobbying and political contributions: https://www.opensecrets.org/news/2022/05/texas-is-a-top-target-for-gun-rights-lobbying-and-political-contributions

Why US gun laws get looser after mass shootings 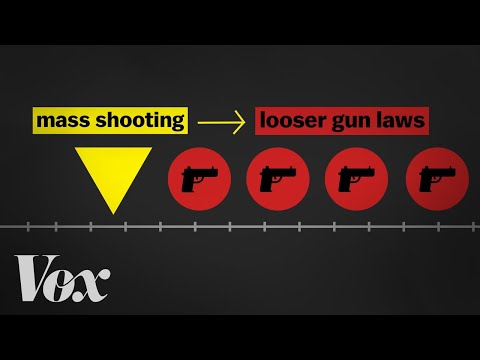 Congress has rarely acted. But gun laws have been changing. Subscribe and turn on notifications ???? so you don't miss any videos: http://goo.gl/0bsAj...