The fight for women's rights too often excludes people of color — here's why Black and brown women need to be heard.
» Subscribe to NowThis: http://go.nowth.is/News_Subscribe

Here’s why women of color's voices need to be heard in the fight for women’s rights.

April Baskin: I think that there are so many ways to be an an intersectional feminist. I think the first and foremost is to take time to reflect and learn about the different issues at play because intersectionality is not only about identity, it’s also about systems and different overlapping forms of oppression.

Celeste Lindsey: I think in this day and age we aren’t necessarily seen or heard. They try to bury us but once again the quote is real, They tried to bury us and did not know that we are seeds and we grow and we are heard.

Cecily Thomas: The women’s march has been primarily white women centered, it’s been primarily Cis, it’s been a little bit trans-phobic, especially with the pussy hats and just kind of making people who don’t have vaginas and things like that but still identify as women or even gender non-binary.
I think it’s still progressing but I think increasingly people are recognizing that there’s just more than white women that need to be heard, that need to be put on front lines, and that need to be on the front of the lines when were making new laws, new legislation, and breaking down different stereotypes and institutions that we are consistently part of .

Amissa Pitter: I think sometimes, yeah we are left out of conversations. We're not aware and we don't come out and support. But again. I've. Seen a lot of diversity Here and especially more women of color coming out and being part of the conversation.

Many women also marched to show support in the wake of the R Kelly abuse allegations controversy.

Johana Salinas: My sign is in honor of all black and brown women that often get ignored in the media. Behind my sign says fuck R Kelly because of the recent lifetime docu series that recently came out and you know these women have been voicing their stories for a very long time until now that they’re getting heard, we could have protected them a long time ago if black and brown women aren’t ignored. 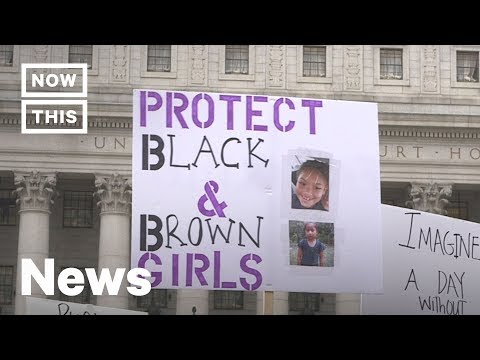 The fight for women's rights too often excludes people of color — here's why Black and brown women need to be heard. » Subscribe to NowThis: http://go...