Zimbabwe: A look back through Mugabe's media legacy - The Listening Post (Feature)

A little more than a week ago, Robert Mugabe was forced to announce his resignation as president after keeping Zimbabwe, and the media there, under tight control for 37 years.

The media landscape he inherited when he took office was tightly controlled by his predecessor, Ian Smith, and it reflected the interests of the country's white minority.

Mugabe did not reverse Smith's media policies but he adopted many of them, ending hopes of a free press. Journalists covering protests, corruption and other stories challenging the government faced harassment, imprisonment and even assault by the authorities.

In the 1990s, expropriating and redistributing white-owned farmland among black Zimbabweans helped Mugabe shore up his waning popularity. And as foreign journalists began to report on the story, Mugabe found a way to use the framing of it by the western media, particularly the British media, to foster an "us" versus "them" narrative that would serve him for years to come.

"The global media representation of the Zimbabwe crisis in the early 2000s was often presented as a racial conflict between white farmers and a Zana black government," explains Wendy Willems, assistant professor at the London School of Economics. "And this was kind of helpful to the Zimbabwean government in many ways because it allowed them to prove that Britain was mainly interested in Zimbabwe because of the white population."

Political analyst Ibbo Mandaza Ibbo says "one would have expected a more balanced view of the land reform as part of the decolonisation process, but no, the media went wild, the British media in particular and they highlighted the atrocities against the whites more than those against the black workers on those farms, so it became a spectacle to put on the front page of British newspapers or the electronic media, the white was being battered or killed."

Reports that white families were being kicked off their farms, often at gunpoint and without compensation, was a big news story. But Mugabe turned the international media fixation on that story against them, claiming they had a pro-colonial bias.

Whether that was true or not, Mugabe exploited it by banning news outlets like the BBC, calling its journalists agents sent by Britain to destabilise Zimbabwe, knowing that anti-imperialist message would resonate with voters and help reinforce his leadership.

"If the foreign press had adopted an even-handed approach, comprehensively looking at each and every aspect of that [land reform] programme, in order to present a fair and balanced dissemination of news, they would undermine the president of Zimbabwe, by removing the carpet from under his feet," says George Nyrota, former editor of the Daily News.

Mugabe's relationship with the British media would become outwardly hostile but, in a way, symbiotic. He gave journalists an easy story to cover, the cliche of an archetypal African dictator.

And they, in turn, provided him with an easy target by allowing him to dust off his old anti-imperialist credentials to combat the international media, a tactic that would help the Zimbabwean leader survive for 37 years. Until now.

Zimbabwe: A look back through Mugabe's media legacy - The Listening Post (Feature) 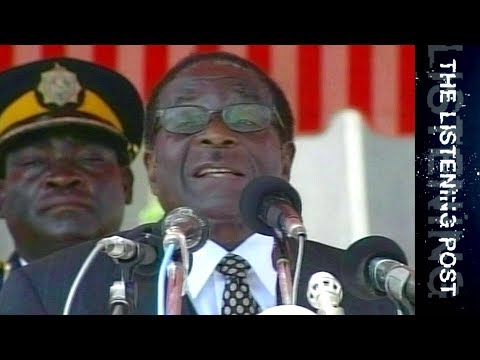 A little more than a week ago, Robert Mugabe was forced to announce his resignation as president after keeping Zimbabwe, and the media there, under ti...